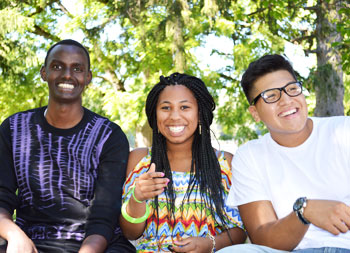 It has by now become a commonplace to talk about how rapidly and deeply the world is changing. Economic and political events in countries thousands of miles away affect everyone, often immediately. Recognizing this, Oakwood Friends School developed its Global Affairs Certificate Program. Students graduating with a Global Affairs diploma engage in rigorous academic work in conjunction with practical experience.

Alice F. (USA)
The Intersection of the Tiananmen Square Protests and Modern Sociopolitical Culture of China
The 20th century was a time of great social and political upheaval in China.  Suggesting that  the Tiananmen Square Protests began significant cultural change in China, this project explores the effects the resulting massacres have had on modern Chinese civil culture.

Basira D. (Afghanistan)
The Healthcare Disaster
This project compares different aspects of public health such as cost, infant mortality, and obesity in healthcare systems around the world.  It concludes with an evaluation of how different systems affect people’s health.

Enid S. (Ghana)
Access to Water and Sanitation and the Disparities Between Developed and Developing Countries
Lack of access to safe water has resulted in much disease burden on people in developing countries which has led to a critical but geographically unjust issues for all levels of society. This paper explores ways to  incentivize to collaboration to successfully construct improved and fairer systems of water distribution.

Nai’lah T. (USA)
Social Psychology of Politics and Behavioral Economics
Humans act differently in social environments than they do when no one is looking.  This project explores recent work in Social Psychology and Behavior Economics to explain the behavior of mass movements like national uprisings, the development of political parties and socioeconomic conflicts in seemingly developed countries.