A Day in the Life of the Middle School 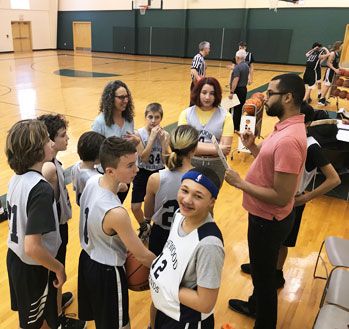 Early this February I walked into our Meeting Room for morning Collection filled with anticipation, excitement and a little anxiety. With the seventh-grade class as my guide, I focused on the experience at hand… my day as a middle schooler. The last time I was in this position the Carter and Reagan administrations were in transition and the Trapper Keeper was an organizational must. As our Middle School Director texted a photograph of the daily schedule to my iPhone, I quickly realized many aspects of the middle school experience have changed over the last forty years.

Walking the brick pathway between Main Building and the Dining Hall, our first stop was the photography studio and darkroom. Having taken advantage of unseasonably warm weather the day before, the students had already captured six rolls of black and white film around campus. Throughout our hour-long class, canisters were awash in fixers and stop-baths. Timers governed our every move as we measured, poured, tapped, and rocked the film. A nervous energy filled the studio space as we hung negatives to dry while performing a quick quality-control inspection. Cutting, enlarging and final development would have to wait for another day. Class one complete.

Leaving the photo lab, we veered left towards Collins Library and took a shortcut across the quad into Crowley Building and science class. Discussions around sedimentary rock and Jurassic era fossils came alive with the addition of a hands-on project involving plaster molds, clay, sea shells and bone fragments. A query on ‘what can we learn from fossilized footprint patterns’ lead to a spirited discussion.   A few eyebrow raising jokes from both students and me revealed something that my wife has probably known for years - I possess a sense of humor that has not matured much beyond my ten-year-old self. Class two complete.

Silent Reflection: Both our Upper School and Middle School students have Meeting for Worship on Wednesdays. Late morning sun illuminated the back wall, benches and floor. Some of our meetings are structured by guided queries, some are punctuated by powerful and emotional messages shared by students, and some center in complete silence for the entire thirty minutes. This meeting was silent throughout. I was reminded of the special time and place this space affords our community. We unplug and look inward. We reflect. We think. As meeting concluded we shook hands, and not surprisingly the middle school students bolted out the doors.

English and writing were next up. Gathered in a circle we compared the merits of novel versus movie. A statistical approach plotted who, when, what, and how we talked during class. Graphical representation of conversation? As a statistician and engineer, I was both intrigued and pleasantly surprised by this addition. Spoiler…’ Princess Bride’ the movie is better than the novel according to Oakwood’s 7th grade (and most of society).

On to United States History, Civics and Politics: Having studied the US constitution from formation to implementation earlier this term, the 7th grade class began with two questions: ‘What is a State of the Union Address?’ Why do we have one?” We then proceeded to watch the first 20 minutes of the recent State of the Union Address and then were tasked with identifying major themes, major goals, and topics discussed by the president. Our homework: finish watching the SOTU address, discuss with family at home and further identify areas of success, areas of concern and how we as 7th graders can become involved. Fourth class done… and I am exhausted.

With no rest for the weary, we shifted gears from the classrooms to the courts. Next stop, Kildonan School with the 7th graders and the rest of our middle school basketball team. After forty-five minutes of travel through the rolling horse fields of Amenia, we arrived. Every Oakwood player, from our shortest 6th graders to our tallest 8th graders saw ample playing time. And although the basketball gods did not favor us with a win, we did drain an improbable skyhook three point shot at the buzzer. Multiple parents made the journey to watch their children and the Oakwood girl’s JV basketball team arrived in time to cheer us on prior to their match. The coaches concluded an inspiring wrap-up talk with Dunkin Donuts before we boarded the bus back to Oakwood. Exhausted we travelled back to Oakwood’s campus. And although tired, this day reminded me of the true value of an Oakwood education and the merits of our Oakwood community. I was inspired by the engagement, the passion and the energy of our current seventh graders. They have a lot of Oakwood learning ahead of them, as do I.