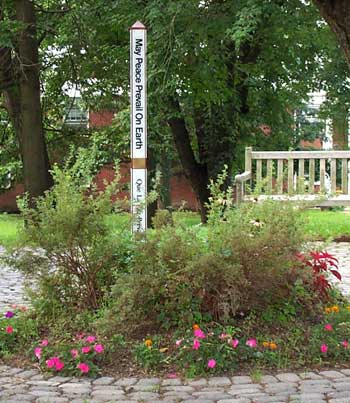 I know from personal experience that there is a unique and clarifying transformation which happens to virtually everyone who attends Oakwood Friends School. I believe that the same is true for faculty members and staff.

It started for me on a spring afternoon in 1943, when my mother and I met with Headmaster William J. Reagan at his office the Friends’ Headquarters in the Greenwich Village neighborhood in New York City.

To me he seemed a character straight out of Dickens. A heavy-set man, he was dressed in a grey vested suit, and of course, a braided gold watch chain hung from small pockets on either side of his vest.

We chatted for a bit about my experiences in the New York City schools I had attended. He engaged me in general conversation, and then he looked directly at me and asked:

Who is your favorite author?

I remember responding directly: I like Edgar Allen Poe, best. His short stories and poems are really good. I especially like The Raven.

We talked about Poe and poetry generally. I remember feeling quite comfortable with him. He queried me about the other subjects I enjoyed and I told that I liked them all.

Mr. Reagan then asked me what I knew about The Society of Friends. I recall responding that they were peaceful people and that they were against slavery. He looked directly into my eyes—as if searching for my most private thoughts. Then he turned in his seat, picked up the telephone and said: would you ask Mrs. Springer to join us.

My mother came into the office. When she sat down, Mr. Reagan gave a big smile and announced: Mrs. Springer, Eric will be joining us at Oakwood! My mother clasped her hands and beamed. That’s wonderful! She quickly turned to me and saw that I had a big grin on my face. She nodded and turned to Mr. Reagan: I am very, very pleased.

And so began the transformational experience I referred to earlier. I have little recollection of the New York Central train ride to Poughkeepsie, nor how we made our way to the Oakwood campus.

However, I do recall, quite clearly, a sense of change as we turned off the highway and made our way to the stone marker which proclaimed:Oakwood School.

Everything else about that first day is a blur. But, the evening remains a clear and splendid memory: almost all of the students –new and old, alike-- assembled in a large room and began to mingle and talk. New room-mates got acquainted with each other. If memory serves, I was the only person of color in the group, but that circumstance was clearly of no consequence.

From that first evening on my experiences at Oakwood were all positive. I enjoyed all of my courses and each of my teachers. They had a special enthusiasm for their craft and were always available, in class or on campus, to respond to a student’s question. My Oakwood training fully prepared me for college and law school. But much more importantly, Oakwood prepared me to be a better person and citizen.

This was a direct result of our Sunday Meetings. I had attended Sunday school in Manhattan at St. James Presbyterian Church and found the experience to be enlightening and, sometimes, even engaging.

My first Sunday Meeting at Oakwood, however, remains in my deepest memory. I recall Headmaster Reagan describing the protocol for the newcomers. I also recall my early sense of dread: What could I possibly say that would be of importance?

But later in that first semester, I did rise to make an observation –I don’t remember about what.

When I sat –still feeling insecure and out of place, I looked up at Mr. Reagan. He was smiling.

During my three-years at Oakwood the Sunday Meeting became and remained a favorite time for me. On occasion I would rise to share a thought that seemed worthwhile. But, for the most part I listened to others who rose to share their observations or insights. I also found the Sunday Meeting a perfect occasion to review critically my own actions and relations with others during the previous week.

Of all my great experiences at Oakwood, the Sunday Meeting had—and still has a very deep meaning to me.