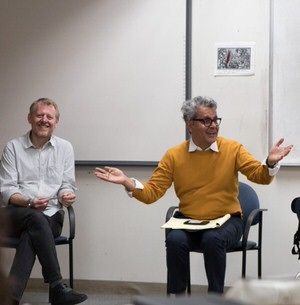 Writer and journalist Amitava Kumar will open Alumni Weekend 2019 on Friday afternoon, May 17th, with the presentation of the Caroline “Dash” Davis Gleiter Lecture on Social Justice.

Now in its 15th year, this lecture series was established by classmates in memory of Dash Davis Gleiter ’51 in recognition of her work in civil rights and her lifetime of volunteer activities to promote social justice. Kumar will present: “A Human Writes Human Rights: A Novelist’s Report.”

Amitava Kumar was born in Ara, India, and grew up in the nearby town of Patna, famous for its corruption, crushing poverty and delicious mangoes. He is the author of several books of nonfiction and two novels. His prize-winning book A Foreigner Carrying in the Crook of His Arm a Tiny Bomb (2010) was described by The New York Times as a “perceptive and soulful … meditation on the global war on terror and its cultural and human repercussions.” His latest book, Immigrant, Montana: A Novel (2018) was included in the list of notable books of the year by The New York Times.

Kumar is the Helen D. Lockwood Professor of English at Vassar College and has been honored with residencies at Yaddo and The Norman Mailer Center. He also has been awarded a Guggenheim Fellowship as well as a Ford Fellowship in Literature from United States Artists. He serves on the editorial board of several publications and is the script-writer and narrator of two documentary films: “Pure Chutney” (1997) and “Dirty Laundry” (2005). Professor Kumar teaches classes that mainly deal with reportage; the essay-form, both in prose and film; cities; literatures describing the global movement of goods and people; war; and memory-work. He earned his BA and MA at Delhi University; an MA at Syracuse University, and PhD at University of Minnesota.

Oakwood Friends School is honored to welcome Amitava Kumar as our 2019 Caroline "Dash" Davis Gleiter Lecture on Social Justice speaker. All are welcome.

Winter Midterm report cards available on Portal
more >>
Virtual Gathering and Auction
Please join us for a wonderful evening hosted by Head of School, Chad Cianfrani. The evening will include a showcase of
more >>
More EventsView Calendar