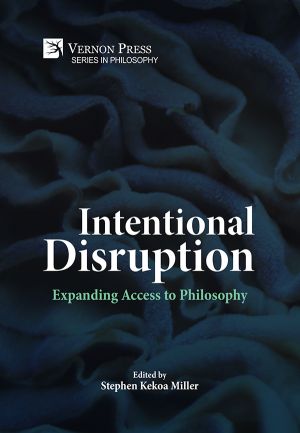 Congratulations to Humanities Chair Stephen Miller on the publication of “Intentional Disruption: Expanding Access to Philosophy”. Stephen found the contributors, guided the focus of the chapters so they connected as a complete book, wrote the first chapter and edited the whole text for content, style and references.

"Intentional Disruption: Expanding Access to Philosophy" offers eight essays that describe and analyze a variety of innovative approaches to introducing philosophy to the larger public, including in schools and through community programs. The essays are engaging and thought provoking, and they include practical guidance for anyone seeking to develop similar programs. Philosophers, educators, and community organizers would all benefit from the suggestions and ideas portrayed in the book, which include explorations of the aims of philosophical education in general and pre-college philosophy in particular, the role of ethics education, graduate and undergraduate courses and internships in pre-college philosophy, integrating philosophy into existing school curricula, epistemic empowerment and anti-racism, experiential philosophical engagement, the relationship between pre-college philosophy and neoliberalism, and the connections between public philosophy and civic discourse.

The chapter authors are highly respected among their colleagues (I work closely with many of them), and the chapters address a broad swath of the most recent work being done in the field of philosophy with young people. The programs described are also highly original and will appeal to many audiences: those working in non-traditional settings, with diverse populations and in languages other than English. The scholarship seems impeccable to me; the many references give readers the opportunity to read further.

"...readers will find this volume to be an invaluable resource as snapshots of what creative people can offer the world, how philosophy can speak to deep human concerns and needs, and a primer on how to make it happen in your community. The twelfth century theologian and philosopher, Bernard of Clairvaux, claimed that we are “standing on the shoulders of giants” as we use the insights of the past great thinkers to look ahead. While our authors are all inspired by the work of Lipman, Matthews, Sharp and the many other more recent “giants” in the field of philosophy with children, they can serve as our own giants as we look forward to see what we can do to build on their insights and discoveries."

The book can be purchased directly through the publisher, Vernon Press, by clicking here: https://vernonpress.com/book/1258