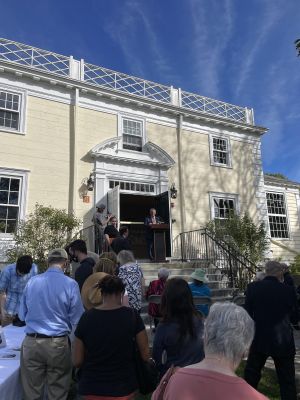 The feature event of the weekend was the ribbon cutting and dedication of The Spencer Family Theater. This event was in recognition of the exceptional support and service of former Board President Don Spencer and his wife Vickie Ricardo, parents of Alyssa Spencer ’13, and marked the completion of the school’s capstone project, the renovation of the theater, housed within the first building constructed on the campus for the school’s use in 1921.

The ribbon cutting was followed by the book launch of Oakwood: 100 Years in Poughkeepsie co-authored by Matthew Voorhees '17 and Anita Dickhuth '54 and a lively and engaging “Through the Decades” panel with musical entertainment.  Alumni and friends completed their weekend with a visit to Nine Partners Meeting House on Sunday morning.

The celebratory weekend was in recognition of the June 1921 graduation, the first to take place at Oakwood’s 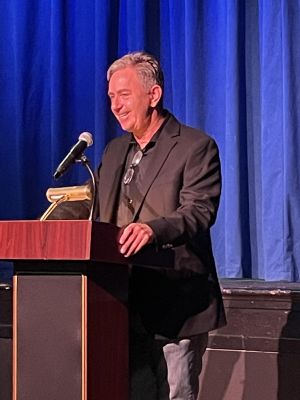 Poughkeepsie campus. Taking place on June 18, 1921, sixteen students received their diplomas in a ceremony held in what was then the Assembly Room and is now the Meeting Room. The commencement speaker that first year was Daniel Smiley, Sr., who spoke on the way in which teaching standards were changing and Oakwood was emblematic of that. Smiley said in his address, “the methods of teaching are so changing that at the present the teachers do not say to the pupil ‘go and do this,’, as ‘come, let us do this.’” He was the great grandfather of Albert Smiley ‘62 and 2nd great uncle to Josephine Smiley ‘ex 33, Doris Smiley ‘ex 35, Virginia Smiley ‘ex 40, and Marjorie Smiley ‘51. Like his great grandfather Daniel, Albert “Bert” Smiley operated the Mohonk Mountain House which has been in the Smiley family since 1869.