For the 17th year, Tim and Laurel Sweeney, parents of Sean ’09, and the owners of Stone Ridge Wine & Spirits, sponsored a festive evening for parents, faculty, board members and guests at our annual fundraiser to support Oakwood’s Annual Fund. The event, held on March 5th at Locust Grove in Poughkeepsie, was also sponsored by Berg-Moss Architects (Chris and Erin Berg, parents of Milla ’23 and Corbin ‘27), Hudson House River Inn (Regina and Sam Bei, parents of Karolina ‘26) and Rondack Construction. 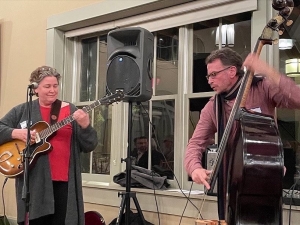 New this year, Oakwood was thrilled to welcome acclaimed singer-songwriter Rebecca Martin and renowned jazz bassist Larry Grenadier as our very special guest performers at this year’s event.  Rebecca and Larry are globally recognized jazz artists, and also the proud parents of Charlie Grenadier, class of 2024. Rebecca and Larry presented selections from their new album After Midnight.

As Larry describes, “It’s a unique music connection because of the time spent on and off the bandstand with Rebecca over the years, we have the ultimate level of communication.” Their latest collaboration, After Midnight, joins Martin and Grenadier with Portugal’s Orquestra Jazz de Matosinhos (OJM) for a stunning collection of original songs and beloved standards.

Over the past 25 years Rebecca Martin has become a critically acclaimed singer and songwriter, educator, and community organizer. She began her career in the early 90s as part of the groundbreaking duo Once Blue, with Grammy-winning songwriter Jesse Harris (Norah Jones). The two made several albums on EMI Records and toured throughout the United States and Canada with Lisa Loeb, Emmy Lou Harris, Squeeze, Shawn Colvin, and many others.

In the late 90s she began her solo career and recorded a half-dozen acclaimed albums. She has recorded in collaboration with pianist Guillermo Klein and legendary drummer Paul Motian, and as part of the vocal trio Tillery with jazz artists Becca Stevens and Gretchen Parlato. 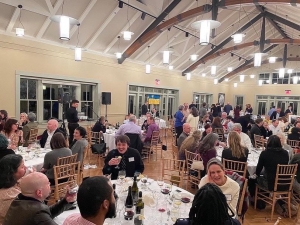 Larry Grenadier has been praised as “a deeply intuitive” musician by The New York Times and as an instrumentalist with a “fluid sense of melody” by Bass Player magazine. He has created an expansive body of work in collaboration with many of the genre’s most inventive, influential musicians – from early days playing with sax icons Joe Henderson and Stan Getz to what has been decades performing alongside pianist Brad Mehldau, from extended experiences working with the likes of Paul Motian and Pat Metheny to co-leading the cooperative trio Fly (with Mark Turner and Jeff Ballard) and quartet Hudson (with John Scofield, John Medeski and Jack DeJohnette). His ECM Records solo bass release titled The Gleaners presents a brace of originals alongside pieces by George Gershwin, John Coltrane, and Paul Motian.

You can learn more about their music at rebeccamartin.com and larrygrenadier.com.

Thank you to everyone who was able to attend this truly special event! We were so thankful for this wonderful opportunity to come together once more and see so many smiling faces.

To view more photos of the dinner click here: https://photos.app.goo.gl/LSj2XeNbN4HsfM7p7