Jonathan Talbot '57 Installs "The Oakwood Triptych: Oakwood in the 1960's" in The Spencer Family Theater 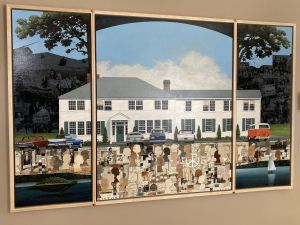 We are thrilled to share the news that Jonathan Talbot '57 has completed "The Oakwood Triptych: Oakwood in the 1960's" a collage painting commissioned by Joel Erlitz '68. This stunning piece is now permanently installed at Oakwood in the lobby of The Spencer Family Theater. We are excited to share it with visitors to campus for years to come! Work on the triptych was inspired by the 100 Year Celebration held on campus this past fall and alumni from throughout the 60s informed Jonathan's work.

Jonathan shared the following about the process of creating the triptych:

“When Joel Erlitz, class of '68, commissioned me to create a work about Oakwood in the 1960s, I realized that I would need input from people who were there during that decade. As a result, with the help of the alumni office, I wrote to the approximately 400 alums from the 1960s, asking them about their time at Oakwood and what they thought should be included in the work. I received between seventy and eighty responses, and I was impressed by the extent to which the memories that the respondents shared focused as much on what had happened in the wider world as it did on campus happenings

Initially, designing the work was difficult. My own relationship with Oakwood is emotionally charged in diverse ways and analytic objectivity was elusive as the triptych developed. Fortunately, the responses I had received from 1960s Oakwood alums provided the work with both energy and direction and helped it take on a life of its own. When that happened, I was able to release my own intentions and let the triptych find its own path to completion.

The result is the work installed in The Spencer Family Theater. Oakwood is depicted as a bright safe space in a world shadowed by the war in Vietnam, the numerous assassinations of American leaders, and the trials of the civil rights movement and the deaths that were part of that struggle. I did my best to capture the texture and diversity of Oakwood's student body, to celebrate some of its faculty, and to recognize the extent to which its Hudson Valley location has influenced its evolution.”

Click here to see the triptych and to learn more about Jonathan's work.